Nutritious You on Amazon 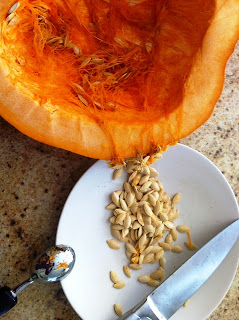 This is a pumpkin season. They are everywhere- in your house, in my house, in the stores, schools, offices. Don't throw them away like we always do after the holiday! In fact, the best part of having a pumpkin comes after the Halloween. Try the following:


Take your large friend and cut it by half. Take the seeds out, clean them off and dry them in the oven for a little bit to make them crispy so you can enjoy them later. Put the pumpkin in the oven for about 30 minutes on 350 degrees or until it’s soft when you prick it with the knife- just make sure it’s not too soft. Once it’s done, you have a huge amount of pumpkin ready to go with soups, salads, stews or plainly as a snack.

You can pack up in the rest in containers and freeze all that you are not going to use in the next week. Last year, one large pumpkin was feeding us until the end of the winter. I was making pumpkin soup on a regular basis (my favorite recipe is below). However this year, I have added a few other recipes. For instance: I cut up chunks and give them to my little kids to chew as a snack. I may add some honey for my toddler. I also like to just sautée it in coconut oil with a large amount of parsley and garlic. My Cream of Pumpkin Soup is my favorite though! 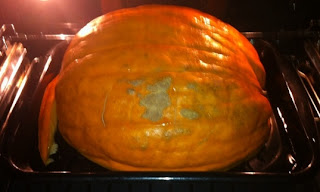 Enjoy the Season!
Posted by Unknown at 10:55 AM

Email ThisBlogThis!Share to TwitterShare to FacebookShare to Pinterest
Labels: cream of pumpkin soup, fall season soup, how to bake pumpkin, what to do with pumpkin after Halloween

Yes or Now to GMO Labeling

How much veggies/fruits/nuts/seads do you consume on daily basis?

Get Found by
Search Engines